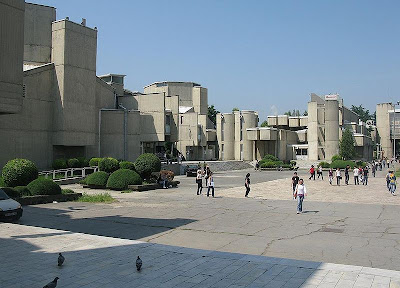 Cyril and Methodius University of Skopje, Skopje, North Macedonia.
(Public Domain Photo from Wikipedia).
___________________________________________________
Jennifer Semple Siegel, retired adjunct faculty at York College of Pennsylvania and author of several books, served as a Fulbright Scholar at the Cyril and Methodius University of Skopje in North Macedonia during the 2009-2010 academic year, according to the United States Department of State and the J. William Fulbright Foreign Scholarship Board.
Siegel taught Creative Writing, African-American Literature, and Academic Writing; with her Macedonian colleagues she also helped to develop an American Studies program at the University.
Siegel was one of approximately 1,100 U.S. faculty and professionals who traveled abroad through the Fulbright U.S. Scholar Program during the 2009-2010 academic year.
The Fulbright Program, America’s flagship international educational exchange program, is sponsored by the United States Department of State, Bureau of Educational and Cultural Affairs. Since its establishment in 1946 under legislation introduced by the late Senator J. William Fulbright of Arkansas, the Fulbright Program has provided approximately 240,000 people – 108,160 Americans who have studied, taught, or researched abroad and 178,340 students, scholars, and teachers from other countries who have engaged in similar activities in the United States – with the opportunity to observe each others’ political, economic, educational, and cultural institutions, to exchange ideas and to embark on joint ventures of importance to the general welfare of the world’s inhabitants. The Program operates in over 155 countries worldwide.
Recipients of Fulbright awards are selected on the basis of academic or professional achievement, as well as demonstrated leadership potential in their fields. Among the thousands of prominent Fulbright alumni are: Muhammad Yunus, Managing Director and Founder, Grameen Bank, and recipient of the Nobel Peace Prize in 2006; Javier Solana, Foreign Policy Chief, European Union; Ruth Simmons, President, Brown University; Craig Barrett, Chairman of the Board, Intel Corporation; Shamshad Akhtar, the first woman to hold the position of Governor, State Bank of Pakistan; Alejandro Jara, Deputy Director-General, World Trade Organization; Raoul Cantero, former Justice, Florida Supreme Court; Renee Fleming, soprano; Gish Gen, Writer; Daniel Libeskind, Architect; Aneesh Raman, CNN Middle East Correspondent; and Sibusiso Sibisi, former President and CEO, Council for Scientific and Industrial Research in South Africa.
More Notable Fulbright Alumni
Fulbright recipients are among 40,000 individuals participating in U.S. Department of State exchange programs each year. For more than sixty years, the Bureau of Educational and Cultural Affairs has supported programs that seek to promote mutual understanding and respect between the people of the United States and the people of other countries. The Fulbright U.S. Scholar Program is administered by the Council for International Exchange of Scholars (C.I.E.S.).
For more information about the Fulbright Program or the U.S. Department of State’s Bureau of Educational and Cultural Affairs, visit the State Department website or contact James A. Lawrence, Office of Academic Exchange Programs, telephone 202-453-8531, or e-mail fulbright@state.gov.

The Politics of Memoir and the Making of Memoir Madness